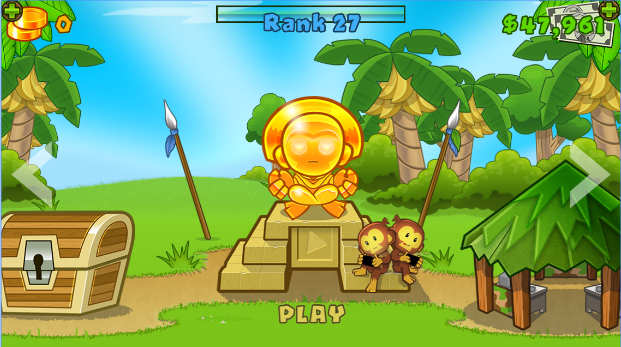 Here's the list of Bloons Tower Defense Strategy 5 strategy, guide, tips and tricks that will help you complete all mission and special mission . Bloons TD 5 is tower defense game developed by Ninja Kiwi, a New Zealand based company. In this game, you need to defend your base from the non-stop attack of balloons a.k.a bloons.  Defend your base using the monkey towers.Upgrade your towers into powerful ones to make them usable on late game. Special Mission Guide How To Beat Rink Map On Hard I will show you some  strategy  to beat The Rink map on hard mode. On this case, I have a fully upgraded Monkey Engineer on Specialties mode of Bloons Tower Defense 5. How To Beat MOAB Madness Strategy I will show you the strategy on how to beat the MOAB Madness on Bloons Tower Defense 5 Special Mission. This mission is the same as the MOAB mission on bloons tower defense 4 but on a different map. How To Beat Full House Strategy I will discuss the different strategy on how to beat
Read more

In the previous blog post, we discussed how to beat the MOAB Graveyard special mission.

Special tile in Bloons Monkey City where players must defend 26 rounds of double-speed bloons. The crystals can be compared to the Technological Terror's Bloon Annihilation with only 12 seconds cooldown.

Special mission in Bloons Monkey City where you have to pop MOAB, BFB, and ZOMG within 3 rounds with $30,000 to start:

In Bloons Monkey City you must build your humble town into a bloon busting metropolis, a centre for all that is monkey, and stop the inevitable horde of bloon-kind barrelling through your city walls. Expand your empire by farming bananas, constructing super sized vivariums for your monkey recruits, stomping over the wild bloons in the wilderness beyond and researching powerful upgrades for extreme bloon poppage.

As your city grows you'll discover another side to BMC. By building bloontonium generators and bloontonium storage tanks, spending city cash on bloon engineering and contructing Bloon Deployment Factories, you can enter into Monkey vs. Monkey duels of might and tact. Raid your friends' cities and take their cash, or run down their buildings for your Simian glory. But do not worry! If you don't want to send a resplendant riposte at your attacking comrades, simply ignore them for a few days and you can continue building your city in Pacifist Mode without needing to defend against unwanted assaults. - Official Ninja Kiwi blog post.

Last time, my posts is all about the special missions on Bloons TD 5 like; How to beat wizard lord, how to beat fast upgrades, how to beat moab madness and many more. But this time it is all about Bloons Monkey City, new game mode realeased by Ninja Kiwi last November 25, 2013 on free beta meaning everyone who has NijaKiwi account is welcome to play.

This game mode is to build and expand a city by capturing tiles, the player must defend against waves of bloons using towers and survive with at least one life.

Unlike the typical bloons tower defense game, Bloons Monkey City needs to attack and capture more pieces of land to expand the city. But as you conquer as many lands as possible, the game is getting harder and harder. This gameplay maybe new to us but this mode has a lot of fun to offer.

Like any other games, this mode have a lot of difficulties such as, trivial (optional), easy, medium, hard, very hard, impoppable.

The June 20, 2014 update introduce the fane-made designed track, Skull Peak. This track can be played in Bloons TD 5 web version.

Skull Peak was designed by Adriano Rossi. Rossi is the winner of 250k FB likes competition launched by Ninja Kiwi.

Skull Peak is a beginner track with these things. This is to ensure that the bloons will have a very hard time escaping tower attacks.
Read more
More posts